Mexican born, but Italian at heart, Karime López brings her unwavering passion and dedication to her role as Head Chef of Michelin-starred Gucci Osteria da Massimo Bottura in Florence. A true inspiration, her philosophy is to present very personal cuisine to her guests, where utter refinement blends seamlessly with the spellbound sincerity of truly felt emotions. 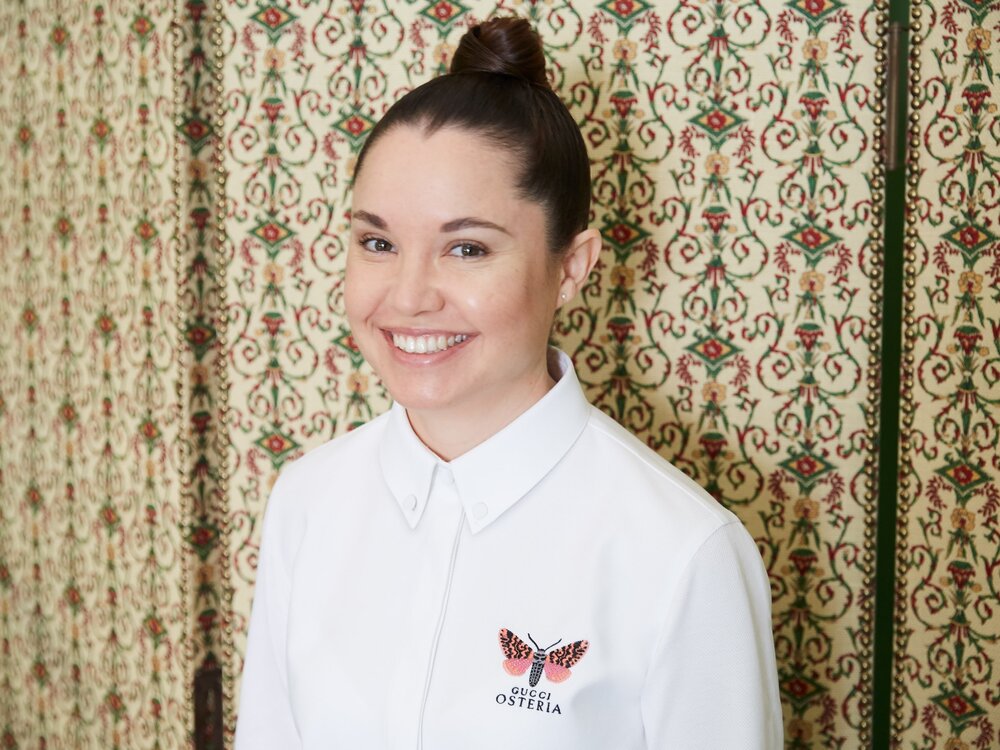 Born and raised in Querétaro north of Mexico City, Karime López’s arrival at the helm of the Gucci Osteria Florence is just the final step in a dynamic and faultless culinary voyage. A truly personal journey, her love affair with food began at a young age, where she slowly but surely became deeply enveloped in its playful language, using it as a means to express herself. Indeed, from her youth, she closely observed as her mother cooked, and would assist her in preparing the family meals. Through this, she inherited the pleasure of being selective, selecting only the freshest ingredients from the local markets, and transforming them into something utterly delicious.

In her twenties, while studying art, Karime spent time in Paris. It was here where she was struck by an unexpected and rather singular form of Beaux-Arts, she says: “It was the impactful discovery of the beautiful French patisseries and Parisian salons de thé and their art de vivre, that made me realize during my student years, how much food could be appreciated as an art form in itself.”

That almost Proustian Parisian epiphany was a real turning point for Karime. Soon thereafter she made the life-changing decision to dedicate herself to food and find her way into the best professional kitchens around the world. Skilfully, Karime found herself in the right place at the right time; where things were happening and changing in the culinary world. Firstly at Santi Santamaria’s three Michelin starred Can Fabes in Spain, where the late Catalan chef – whom Karime considers her first mentor – taught her local techniques and introduced her to a new approach in traditional, bourgeois Spanish/French-oriented cuisine.

Feeling the restless urge to always improve herself and move beyond, she then stepped into a completely different world: the thought-provoking and intensely poetic cuisine of Mugaritz, where Andoni Luis Aduriz celebrates the best of the Basque Country. After that apprenticeship, nothing could cease her insatiable hunger for knowledge.

Karime’s cultural upbringing, however, could not be complete without the immersion into the highest echelons of Japanese cuisine. So when offered the challenging opportunity to work alongside Seji Yamamoto, the master chef of three-Michelin-starred Ryugin in Tokyo, she welcomed it with open arms. Next came Lima, where she worked hand-in-hand with Virgilio Martinez and Pia Leon for nearly six years. Both behind the stove and within the research department, she contributed closely to the cultural studies on Andean ingredients and the resurrection of long-forgotten, indigenous techniques and recipes that today form the basis of New Peruvian Cuisine.

In 2014, while working at Central, she contributed to a culinary performance in New York organized by GELINAZ! – the global think tank of avant-garde chefs. Here, Karime was introduced to chef Takahiko (Taka) Kondo – Massimo Bottura’s sous-chef at Osteria Francescana in Modena – and this meeting was one that would change the course of her life. In the following months, the two kept in touch and over time their relationship deepened, leading them to get married in August 2016.

In January 2017, Karime relocated permanently to Italy to join Taka-san. Whilst taking two months off to immerse herself in the culture and language of her new home, she was approached by Lara Bottura to assist with Massimo’s forthcoming projects, notably, the refining, writing and test-checking of all the recipes included in his book, Bread is Gold. As the legend now goes, the great master of Italian cuisine was so impressed by López’s skills and cultural wide-reach, that he officially asked her to become a permanent member of the “Bottura Family” and offered her the position of Head Chef of the first Gucci Osteria based in Florence.

It comes with little surprise that with the tenacity and unlimited commitment of Karime, her kitchen brigade and the restaurant team, Gucci Osteria in Florence was awarded its first Michelin star in 2020. The Guide has lauded Gucci Osteria as one of the most delightful and innovative restaurants of modern, Italian cuisine. Furthermore, Karime has been granted the esteem and recognition of her peers and more importantly, the devotion of an international audience and the attention of an array of the most distinguished, international food publications.

Located in the Gucci Garden, Gucci Osteria Florence is the culinary flagship of Gucci, taking the luxury fashion house on a new and extraordinary venture. Sharing the same inclusive philosophy, the parent company has created this gastronomic offspring through an unprecedented form of collaboration.

Godfathered by global superstar chef Massimo Bottura, Gucci Osteria has found a perfect platform in Florence (where Gucci was founded in 1921), a city so deeply rooted in its Italian history and art, but with a mind always open to the wider world and ready to embrace a second Renaissance: this time of cuisine.

At the helm of the Michelin starred Gucci Osteria Florence, Head Chef Karime Lopez presents her true vision of a playful and colorful cuisine, daily nourished by the finest local ingredients, personal memories and her life-changing travels exploring the world. Believing food and fashion often express kindred languages, sharing the same requisites when it comes to art de vivre and creativity, her a la carte and tasting menus are continually adapting, according to what is best offered up by the sea, land or local markets.

Her seasonal dishes could be likened to a “capsule collection”; ephemeral and focused on the very time-sensitive availability of produce sourced by treasured suppliers. For example, the simple Rosa de Gorizia from Friuli or the Barba di Frate from Southern Italy are no less creatively championed. Some of her dishes – such as the Marinated Bonito with Purple Corn Tostada, Sea Deepness or The Quail Sound – are already celebrated as timeless evergreens, that help pave the way to a more forward-thinking approach.

What is your culinary philosophy?

To respect the product and the place where I am cooking.

What is your greatest inspiration and how do you incorporate this into your cooking?

My inspiration is the stories people tell me, the colours I see every day and the melting pot of cultures and experiences each individual discovers daily. Life is an endless source of inspiration, lots of different things inspire me; the weather, the city, the place I work.  I incorporate this into our kitchen, respecting seasonality and always listening to what I really want to do.

If you could take a plane to any restaurant in the world, where would you go?

Narisawa in Tokyo and Pujol in Mexico City, both places make me feel at home.

What was the most memorable dish you’ve ever eaten and why?

Black bean soup with shredded roasted turkey that my mother cooked for me when I was a child. Also, Jiro’s sushi in Tokyo, both experiences are always in my heart.