One of the main problems with solar panels is that sunlight is not constant, which means standard solar panels only generate power 15-20% of the time. Another major problem facing humanity as a whole is the amount of food that is wasted, which leads to the depletion of biodiversity and food poverty. 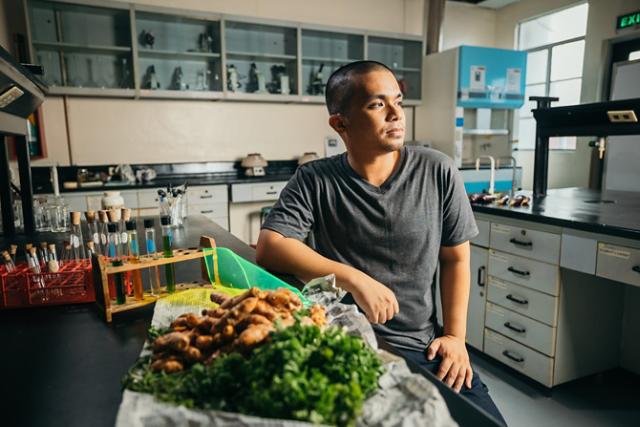 Carvey Ehren Maigue, from Mapua University, in Manila in the Philippines, is helping to simultaneously solve both problems with his invention, AuREUS (Aurora Renewable Energy and UV Sequestration), a solar panel derived from fruit and vegetable waste, that can generate power as much as 50% of the time.

When the panel film is hit by sunlight (UV), the particles absorb and re-emit visible light along the edges due to internal reflectance. PV cells are placed along the edges to capture the visible light emitted. The captured visible light is then converted to DC electricity. Regulating circuits will process the voltage output to allow battery charging, storage, or direct power to appliances.

How much food is wasted globally each year?

Harvesting luminescent particles, the part of the plant that turns unseen ultraviolet rays into visible light, from fruit and vegetables, Maigue has created AuReus, a solar film that can be applied to windows or facades to generate electricity. The panels are able to utilise indirect sunlight such as that which bounces off walls or pavements and turn it into power. The innovation won Maigue the inaugural Sustainability Award as part of the James Dyson Awards in 2020.

An additional sustainable aspect of the invention is that Maigue sources the waste fruit and vegetables from farms and agricultural businesses that have been affected by climate change. The crops that have been damaged by severe weather events is unable to be sent to market as food, so harvesting them in this way, reduces food waste while providing much-needed income for the agricultural communities.

“We need to utilise our resources more and create systems that don't deplete our current resources,” said Maigue. “While AuREUS aims to generate electricity from natural resources, I also want to show that, even if we want to become more sustainable, it’s not only the future generation that would benefit but also us, the present generation. With AuREUS, we upcycle the crops of the farmers that were hit by natural disasters, such as typhoons, which also happen to be an effect of climate change. By doing this, we can be both future-looking, and solve the problems that we are currently experiencing now."

The innovation is one of a new wave of applications that utilise food waste, like Bolt Threads' Mylo leather, used worldwide as a plant-based alternative to animal skin leather and synthetic fibres.

Of course, domestic food waste remains a major culprit and there are many things we can all do to reduce the scraps and leftovers we create at home. But as much as 15% of all produce grown on farms never makes it past the farm gate and ends up either rotting in the field or in landfill. With constraints on the supply chain and shortages in agricultural labour, that figure could increase dramatically, as people around the world go hungry. An innovative solution such as AuREUS may present an opportunity to solve multiple problems at the same time with the right kind of thinking.