; What is the “why” of a restaurant? | RSVP Insider

What is the “why” of a restaurant?

Food anthropologist Natasha Bunzl reports from the sold-out event "The Restaurant as a Research Site" at the NY University. 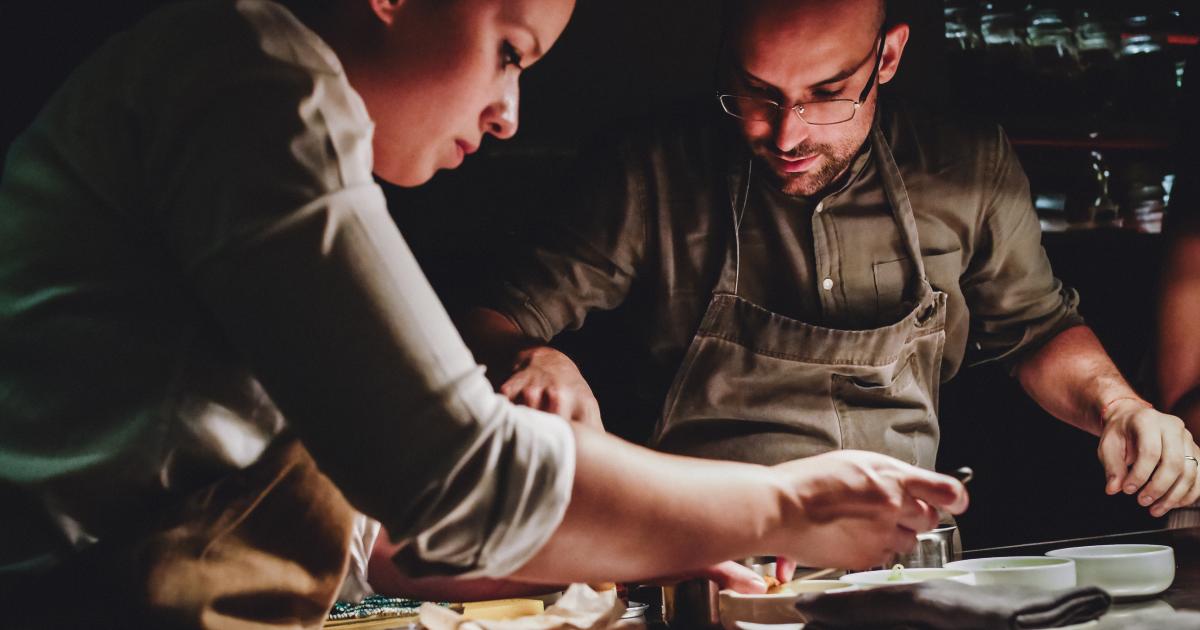 What is the “why” of a restaurant? Restaurant Nouri in Singapore, ranked as one of Asia’s 50 best last year, exists to craft an extended case for using food to understand our shared humanity. On February 17, chefs, food studies scholars, historians and eaters gathered in a lecture hall at NYU to consume nothing but words. The sold-out event featured Ivan Brehm, chef/owner of Nouri, and Kaushik Swaminathani, head of research and special projects at Nouri/Appetite. It was billed as “The Restaurant as Research Center: Food in the Age of Globalization,” and sought to define the way that Nouri and Appetite use the restaurant, “one of the last social gathering places we have” to tell a new story about food and examine material culture. Theirs is “crossroads cooking”. It’s about the moments of connection between food traditions. Food unites us, says Brehm, but instead of focusing on the similarities of how we eat, so often we focus on the differences.

Krishnendu Ray, director of the Food and Nutrition Studies program at the university introduced the men by posing the question: “Is there a culture-oriented argument in favor of the restaurant? In today’s climate, should it go away, like circuses?” Ivan and Kaushik argued that their space exists as an antidote to populism. They argued that too many cooking traditions have committed to unverified ideas of purity. Instead by drawing lines across the globe, mapping globalization, and yes, using the academic side of things to shine a light on techniques and ingredients that would otherwise be appropriative, they speak a language of collectivity beyond words or pictures. Some of their dishes tell ugly stories such as colonialism, slavery, and exploitation, but they use food to be educational in a way that is relatable and focuses on commonality. For them, food is narrative and always embedded in a longer story than is broadly acknowledged. Kaushik said “We’ve come to realize that what we thought of as authenticity doesn’t hold through the layers. Rather the question should be authentic to whom? And when? And where?” Ivan said that he knows that he has succeeded when a man from Sweden and a man from India sit on opposite sides of the communal table, are served the same dish, and upon taking the first bite, they each exclaim ‘this reminds me of my grandma’s cooking”

Take Ceviche. Widely considered to be Peruvian, Nouri pushes back further. Their research looked to the concept of fish cooked in acid, which was done 2,500 years ago in what is now Indonesia and Malaysia. Or sushi- the idea of rice under raw fish borrows from Laos and Cambodia. All along the Mekong delta, years before the Japanese invented what we now think of as sushi, they were eating fermented fish on rice.

There is a bit of iconoclasm to the performance. During the conversation, moderated by Anne McBride, director of the experimental cuisine collective, someone asked if they ever experienced any pushback or criticism for disrupting identities. They relish “being subversive about food history.” Ivan proudly announced that a crowd of chefs walked out of a talk that he did in Spain when he said Paella wasn’t Spanish. Nouri doesn’t advocate for a return to tradition. They aren’t conservationists, “For a tradition to stay alive, it needs to be relevant. It must incorporate the new; have that conversation today.”

Perhaps the most obvious critique of their work lies in the exclusivity of fine dining. How many people can they touch? Isn’t the price tag a barrier? While they acknowledge these tensions, they’re intent on finding a way for the work they do to be democratized. Much of their research is available to the general public through the appetite webpage. Currently, they are working on a series called Re-Envision, which traces the genealogy of iconic dishes, such as kimchi. They publish the findings in 800-1200 word essays on their website, open to all. They’re also opening a gathering space for Appetite above the restaurant that will be open to the public for lectures and tastings, with a library and a record-listening room.

At its core, Nouri strives to consider meaning the main ingredient. For them, the purpose isn’t just to maximize flavour but to tell a story to the diner. Like art or cinema, food can trigger emotions, and not only pleasure and ecstasy, but also wistfulness, nostalgia, joy, curiosity, even pain. One dish at a time, Nouri applies crossroads thinking to food. They seem to say that without a trans-disciplinary approach, what can we expect of the future? “We go to our investors and we say ‘The world is ending, but culture is important, and here’s what we’re doing.’” The profit is a result of doing that well.

Natasha Bunzl is a food anthropologist based in NYC. Her research focuses on culinary nationalism and the intersection of food and medicine. She works in communications at God's Love We Deliver which is an organization that home-delivers medically tailored meals to people with serious illness. Follow her @natashabunzl