; There was racism and abuse at my restaurant job | RSVP Insider

This is a repost from Eater Voices because we think it is extremely important to spread the message that people of color shouldn’t have to choose between earning a living and putting up with harassment in a service job. 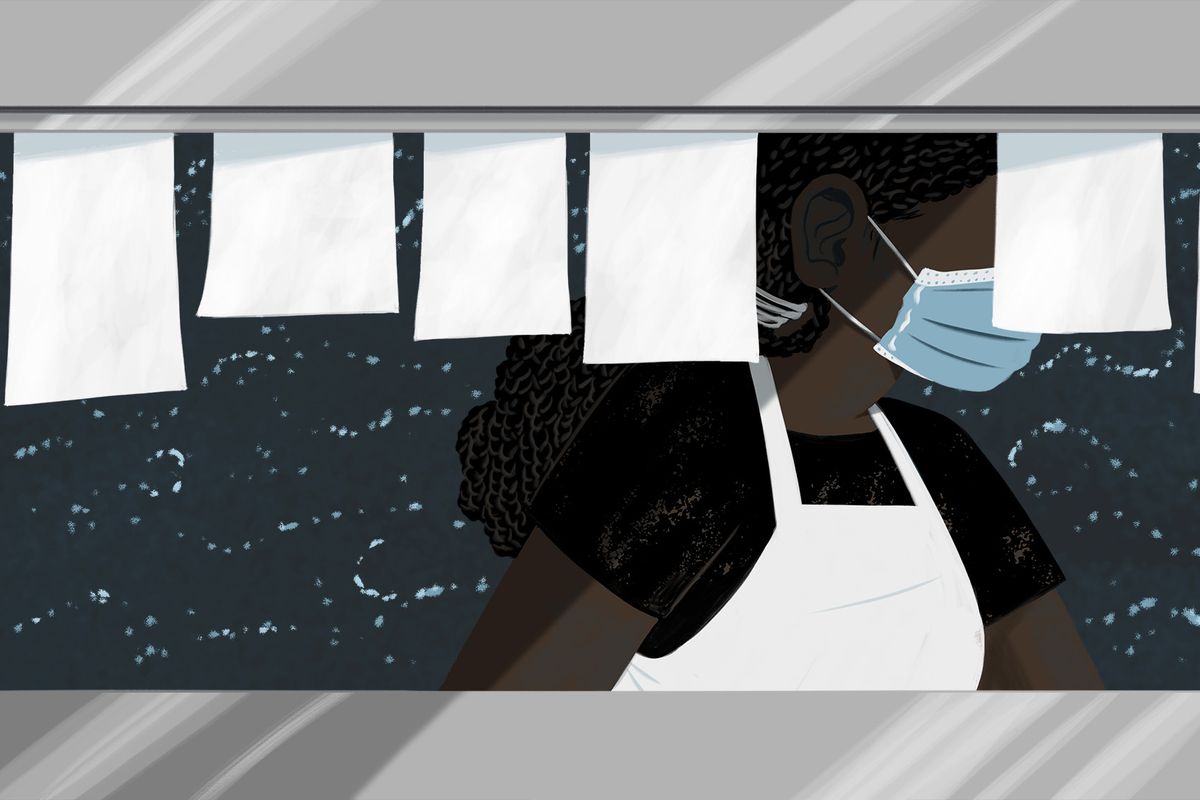 As usual, it was a busy and bustling weeknight shift. Shoulder-to-shoulder guests meant servers squeezing through the rush of regulars to wait tables. The bar was the center of the business — figuratively and quite literally — and we servers would shimmy through in our tuxedo shirts and ties with trays full of treats: crispy bronzini, saucy sauteed perch, cobblers stacked with a mound of Ray’s ice cream. Moving through waiting regulars was like swimming with a cut in open water. The blood brought out the sharks, their eyes watching their favorite foods, cocktails clutched in hands, hoping the specials didn’t run out.

Sweat was always part of the shift.

I was on a double and buzzing from my third energy drink. Known for regularly entertaining tables with delightful conversation, I stood at table 15 chatting about whatever. As I bent to pick up one man’s empty plate, he smiled and looked up at me, wiping his mouth into his cloth napkin. “I swear, you are just so sweet!” he says. “You remind me of someone. You remind me of Aunt Jemima!” The table gasped.

By the time this nonsense occurred, I’d been in and out of the food-service industry for a total of 15 years. My first gig was at a gyro joint in a metro Detroit suburban mall back when you could smoke inside of restaurants. As I write this, I’m 35 and have been out of food service since late 2018. Even being gone, I still routinely dream about my days working in the industry. The effects of that lifestyle are forever imprinted on my brain and body.

Despite all the good times, it took me 14 years to realize that the imprint was trauma.

It’d be a lie to say I don’t attribute my business acumen to serving. I learned how to brand and market myself through working in those aforementioned restaurants. Those skills taught me how to quickly adapt to the power of networking using social media, expanding my already-existing communication skills into the evolution of my current business as a freelance writer, creative director, and curator. There are days when I find myself oscillating between joy and disgust for the industry that’s brought me to my own personal fruition as a queer and Black femme. It’s hard to not look back on aspects of my come-up without moments of shuddering terror. The restaurant industry was a beautiful, two-headed monstrosity, both toxic and rewarding. Each experience taught me that many truths can and do exist at once; I can love that which harms me and I can and did live in dissonance for a dollar to survive.

The harsh reality is the industry is rife with all kinds of oppressive behavior — from the back of house and from the front, and from guests just as much as coworkers. Sexual harassment, blatant racism, and sexism were just a few of the evils I dealt with everyday I tied my apron on and hit the floor. My intersections forced me to handle regular, everyday, standard anti-Blackness blended with misogynoir (a term created by Black feminist author Moya Bailey to describe the anti-Black racist misogyny that Black women experience), all while wearing a smile because if I didn’t, it fucked my with money.

It’s impossible to detail every single instance of offense, though some have stuck in my mind like gum accumulated under a table:

There were guests who didn’t want to sit in my section, regularly choosing to sit in the section of someone white.

Once, a man came and sat at my bar right after his wife had given birth. He showed me a picture of his newborn daughter, so I showed him a picture of my then-7-year-old daughter. I said his kid looked like, “an angel.” He said he couldn’t wait till my kid was 18 so he could take her on a “date.” It took every bit of control to not throw the empty plates I was holding directly in his face. Instead, through a gritted smile, I told him, “You ever talk about my daughter again like that, I’ll kill you.” Yes, I meant it.

Another time, I filled in for a night bartender whose regulars definitely didn’t appreciate any kind of change to their routines. Two cis-gay white men walked in and saw me. Apprehensively, they sat at the bar, proceeding to “berate me” as they became more drunk with every perfect cosmopolitan I made them. Even though the bar was packed, they demanded my constant attention. Nothing I did was good enough or fast enough. They ended up leaving a complaint to the manager on duty because “I’d made them wait too long” while I served other guests.

As a manager, when guests had complaints, I’d stroll out to discuss the issue. Nine times out of 10, if the table was non-Black, there was no respect to my literal authority. Most didn’t believe I was the front-of-house manager. Why wouldn’t they be suspicious when, in fact, I was the first Black front-of-house manager ever in that facility? The reality didn’t match the expectations set by hiring standards used for years by that establishment.

In the back of the house, I was loved and hated, depending on the day and depending on who was working the line. The love came at a price, generally, always hinging on my subservience and always in the form of my acceptance of some kind of harassment. A little-too-friendly grab from the fry cook, a little unwanted sexual advance from someone in pastry. The hate came in waves, especially once I made it very clear I wasn’t tolerating abuse further. At one point, I defended another woman server about the harassment she experienced in the back of house. As unspoken punishment, my orders lagged and I wasn’t communicated to or looked at by the line for almost a month.

Being in the industry so long, I accepted abuse as the standard.

One final service job brought me to the decision to leave restaurants and leave them for good. After changing roles for years, I’d found myself very comfortable as a bartender. It was a fast-paced and exciting position. I absolutely loved making new cocktails. I loved making people smile with what I created. I loved the satisfaction I could bring to people and the money was divine. When one of the bartenders left for maternity leave, I took on her role with the promise of full-time positions available to both of us when she returned. The restaurant group itself boasted six locations, so I wasn’t too concerned about maintaining my spot.

Time passed. She returned. My shifts were cut in half and I was offered a spot back on the floor as a server.

The proprietor came between my double shift to tell me there was “no space anywhere” for me, in any of the six establishments he owned. The rejection ripped me apart, but I sat there listening, unmoved. There were no tears in front of him, though I sobbed between shifts. After wiping away tears, I was back out on the floor, and that night at dinner that customer called me Aunt Jemima. No manager helped, though I asked to switch out the table. That night in November I knew I was done.

My story isn’t an isolated one. People often wonder why workers stay in service-industry jobs where they’re exposed to harassment and abuse — how a style of management or bad behavior pervades a certain restaurant for years without someone speaking out. To that, I say that in America, working for tips essentially makes a person ignore their own exploitation.

I made decent money and supported myself and my kid working in the service industry, and told myself while I was in it that the interesting people I met from every kind of background imaginable and the fulfillment I got from being good at my job outweighed the bad. It made me feel incredible and necessary. And no matter how much the abuse stung, the money always made it better. But the reality was that I experienced harm physically, mentally, and emotionally. I learned the horrifying truth that some people enter the industry knowing they can be abusive and maintain their jobs. I learned that no matter how great I thought I was, it wasn’t enough to provide me the respect or income I deserved. Being a great server wouldn’t change the fact that I am Black, queer, femme, and living in the United States. Subconsciously or not, power dynamics don’t generally favor people like me.

The only thing that can save this industry is a complete overhaul of hierarchies cemented in place. Greed and power make otherwise decent people into living monsters, and capitalism fuels the neverending need for dominance and control. Workers of every orientation should seriously consider radicalizing by unionizing and demanding policy change, starting with an equitable payment plan. They should demand better health care and child care. They should demand that a personal and professional commitment to dismantle anti-Black- and brownness is a bare minimum requirement of folks employed. Working-class people are the majority of this nation’s population and have this perfect opportunity to come together and say, “No more abuse. No more anti-Blackness. No more harm. No more.”

Since I left the restaurant industry, I’ve found new opportunities. In early 2019, I was hired to work for a startup tech company, something totally outside of anything I’d ever done. That position afforded me the skills necessary to launch my own passion projects. After one year, I left that industry. I am proud (and terrified) to say that somehow Bad Future LLC, my company, was founded in 2020. My work sits within a pretty diverse spectrum of media. I produce, write, and co-star in a podcast called The Hard R’s and consult with upcoming podcasters and artists for their passion projects. I also freelance as a writer, creative director, model, and photographer.

It’s impossible for me to articulate what it feels like to be starting a new career at this point in my life. I can guarantee, however, that it will never, ever touch the pain of smiling through abuse and accepting the absurdity of being compared to a fictional Black pancake woman.